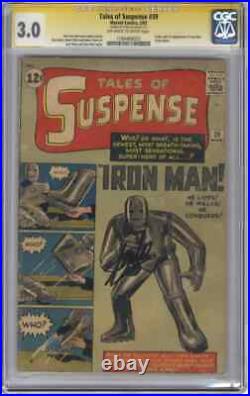 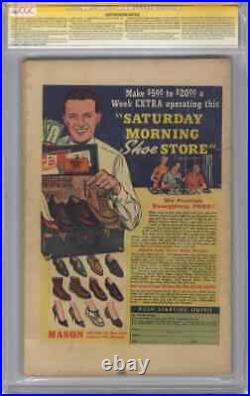 CGC Signature Series 3.0. 134 highest graded signed copy on the CGC census! Of the 2,489 copies on the CGC census, only 236 signed copies exist, making this key issue one of the rarest signed silver age keys. Best believe not many signed copies show up on the market so be sure to grab this great deal whilst it's still available! Cover pencils by Jack Kirby, inks by Paul Reinman.

First appearance of the Black Widow in The Crimson Dynamo Strikes Again! , script by Stan Lee (plot) and Don Rico as N.

Korok, art by Don Heck; The Black Widow and Boris are sent to America to kill Anton Vanko, the Crimson Dynamo, for defecting to America; They are also tasked with killing both Iron Man and Tony Stark. The first half of "The Magician" text story.

, script by Stan Lee (plot) and Larry Lieber, pencils by Larry Lieber, inks by Chic Stone; A fake medium uses special effects to simulate supernatural powers, but he is taken into the spirit world by real ghosts as punishment. , script by Stan Lee (plot) and Larry Lieber (script), pencils by Larry Lieber, inks by Paul Reinman; The Earth of the future is overwhelmingly materialistic, except for one idealistic young man and his lover; They are abducted by aliens, who have determined that he is the best suited to be absolute ruler of their empire. This issue includes a statement of ownership - average print run, 318,932; average paid circulation, 188,005. For peace of mind, every comic book is fully insured. We also offer FREE P&P within the UK!

Can't find what you're looking for? We have over 50,000 books in stock, just message us. If you have one for sale that you think we'd be interested in, just drop us a message with the details (and photos if possible)! Don't forget to check out our social media pages!

This item is in the category "Books, Comics & Magazines\Comic Books & Memorabilia\Comics\Comics & Graphic Novels". The seller is "comic_alchemist" and is located in this country: GB. This item can be shipped to North, South, or Latin America, all countries in Europe, all countries in continental Asia, Australia.