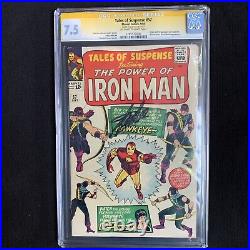 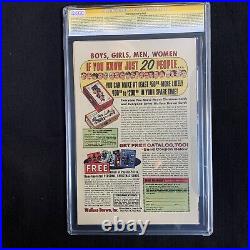 Hooked on books since'76, we specialise in rare, key, recalled, signed & graded comic books. Iconic first appearance of Iron Man! CGC Signature Series 7.5. 21st highest graded signed copy on the CGC census! Of the 2,237 copies on the CGC census, only 195 signed copies exist, making this key issue one of the rarest signed silver age keys. Best believe not many signed copies show up on the market so be sure to grab this great deal whilst it's still available!

First appearance of Hawkeye in Hawkeye, the Marksman! , script by Stan Lee, art by Don Heck; A carnival marksman tries to become a super-hero, but after a misunderstanding with the police he falls in with the Black Widow; Hawkeye attacks Iron Man at the Widow's request, but when he accidentally injures his partner in the fight he flees to get her to safety.

, script by Stan Lee (plot) and Larry Lieber (script), pencils by Larry Lieber, inks by George Roussos (as George Bell); Space Pirates plan to attack a rich planet, thinking the Watcher will not interfere; They are destroyed because they unknowingly targeted the Watcher's home world, the one planet that he can interfere with. For peace of mind, every comic book is fully insured. We also offer FREE P&P within the UK! Can't find what you're looking for?

We have over 50,000 books in stock, just message us. If you have one for sale that you think we'd be interested in, just drop us a message with the details (and photos if possible)! Don't forget to check out our social media pages!

This item is in the category "Books, Comics & Magazines\Comic Books & Memorabilia\Comics\Comics & Graphic Novels". The seller is "comic_alchemist" and is located in this country: GB.