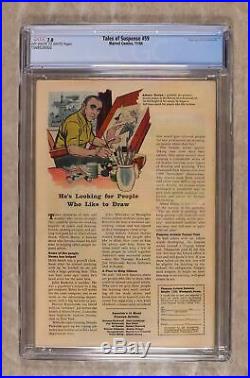 Tales of Suspense #59 1964 CGC 7.0 1568526002. While we make every effort to note any significant damage to slabs, any CGC case may display minor imperfections including Newton rings, slight inner well scuffing (present at time of encapsulation), or standard surface wear (minor scratches/scuffing). If minor imperfections in the case are a concern to you, please look very closely at the item image before ordering. Page quality: Off white to white. Cover pencils by Jack Kirby, inks by Dick Ayers.

Iron Man and Captain America double feature begins. The Avengers guest star in the Iron Man story, "The Black Knight, " script by Stan Lee, pencils by Don Heck, inks by Chic Stone; Iron Man battles the Black Knight; Wasp, Giant-Man, Captain America, and Thor appear. Part of the story continues in "Captain America, " the first Silver Age Captain America solo story, script by Stan Lee and Jack Kirby (co-plot), pencils by Jack Kirby, inks by Chic Stone; While Cap lounges around Avengers Mansion, thinking about Bucky and his place in the world, a gang of costumed thugs break in intent on stealing any secrets or weapons Stark may have lying about the place, to sell for profit; They figure Cap's "just an acrobat"; Bucky Barnes cameo; First appearance of Jarvis (the Avengers' butler). This item is a consignment. This item is a consignment, which means that the price has been set by the consignor rather than by MyComicShop.

It is located at our headquarters and ships just as quickly as everything else we carry. The item images for this listing are not stock images, they show the exact item offered. Also check out our comic value packs.

Value packs are a great way to get a lot of comics at a low price. Each value pack contains around 3 lbs.