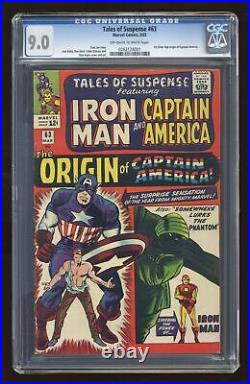 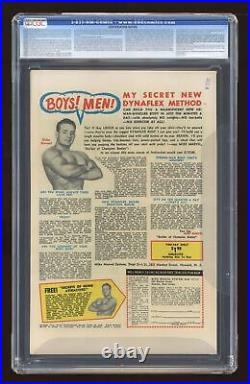 Key Comics & First Appearances. Tales of Suspense #63 CGC 9.0 1965 0262124001. While we make every effort to note any significant damage to slabs, any CGC case may display minor imperfections including Newton rings, slight inner well scuffing (present at time of encapsulation), or standard surface wear (minor scratches/scuffing). If minor imperfections in the case are a concern to you, please look very closely at the item image before ordering.

Cover pencils by Jack Kirby (Captain America) and Don Heck (Iron-Man), inks by Sol Brodsky (Captain America) and Dick Ayers (Iron-Man). , script by Stan Lee, pencils by Don Heck, inks by Dick Ayers; Iron Man stops industrial saboteur the Phantom, who turns out to be one of his employees. Captain America's origin is told for the first time in the Silver Age in The Origin of Captain America! ", script by Stan Lee and Jack Kirby (co-plot), pencils by Jack Kirby, inks by Frank Giacoia (as Frank Ray); While the Nazi war machine marches on, President Roosevelt institutes a top-secret program, "Project Rebirth; In a secret lab, scientist Dr. Erskine gives army 4F reject and volunteer Steve Rogers the "super-soldier serum, " which turns him into a virtual superman; But a Nazi spy who got past security murders Erskine before he can create an army of men like Rogers, and is killed when he runs headlong into some electrical machinery; Rogers becomes the costumed Captain America, as a symbol of freedom; Bucky Barnes appearance; Franklin D.

It is located at our headquarters and ships just as quickly as everything else we carry. The item images for this listing are not stock images, they show the exact item offered.

We take pride in our accurate, consistent grading. You can be confident in receiving a well-graded comic when ordering from us. We understand that condition is important to collectors. Orders are processed each weekday morning, so be sure to submit all orders quickly if you want us to combine them.